The existence of Mermaid.

Are mermaid real? Do they exist in real life? 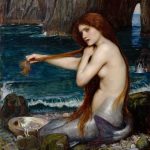 Mermaid are half-human, half-fish mythical creatures. There existence has not been properly documented as of today. In ancient china mermaids were considered as the wives of powerful sea-dragons, where they served as trusted messengers between their spouses and emperors on Land.

Magical female figures first appear in cave paintings in the late Paleolithic (Stone Age) period some 30,000 years ago, when modern humans  gained dominion over the land and, presumably, began to sail the seas. Half-human creatures, called chimeras, also abound in mythology — in addition to mermaids, there were wise centaurs, wild satyrs, and frightful minotaurs, to name but a few.

The existence of mermaids in ancient books, history and historical assets do exist which  does't mean that these creatures did exist. The lack of fossils and other evidence suggest that they probably might not exist. But do mermaid exists is the question yet to be answered.